Hot Week's Update, not much. 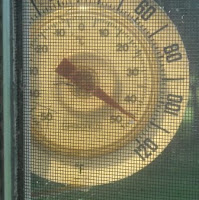 Not much going on here this week sewing wise.

Been super hot and humid, for us anyway.

Had some storms in evening.

Now power was out first of week for close to 3 hrs or so.

Went out as we were eating supper.

Not even a storm! Thank goodness I had supper already done.

Took the lineman fella riding up and down these roads a good bit to find the trouble.

We sat on ft porch till bugs got the best of us!

By bedtime it was back on.

She was doing fine.

We did a small bit of grocery shopping then came on home.

Just too hot to do too much wears you out.

*
Thursday Deb came and we played with some fabric circles I had been given.

Now this is not my best work …we just used as they were.

We decided on what to do /not to do on next ones we do.

I am cutting out some bigger circles to use for some table runners.

We picked her some figs and pears to take home.

*
Today will do some laundry , pay some bills…home chores. UGH!

I also want to do up a fig dessert.

I have no recipe just what I saw gal do on TV.

You use a soft fridge pie pastry on cookie sheet.

Spread with cream cheese in middle, then the fig spread, fresh made or jar bought.

Pull up sides ,fold pretty around with middle showing , brush with egg, add the prosciutto chopped all around ,bake.

We have had the figs wrapped in prosciutto was yummy!

Last night we had tossed Italian Greens Salad with roast chicken and I added chopped pears to it… was good.

Got to use as many of them as we can I hate waste!

Well the big old crows are getting their fair share of the pears and the June Bugs are enjoying the figs too!!!

So last will share with you an idea I was sent I am going to try!

Can’t hurt. This time of year we have flies so bad and they seem to come right in the doors with us!!!

So read what I was sent and to see if you may want to try it too!!!

Many people swear that a zip-lock bag filled half-way with water and
attached over entry-ways will repel flies. No one yet knows how or why
it works, but there is speculation that it has something to do with the
way the moving water refracts light. If you have tried this please use
the comments form at the bottom of the page to share your results with
the rest of us.

I did tried the ziplock bag and pennies this weekend. I have a horse
trailer with full LQ. The flys were very bad this weekend while I was
camping. I put the baggie with pennies above the door of the LQ. NOT ONE
FLY came in the trailer. The horse trailer part had many. Not sure why
it works but it does!!!!!!!

Fill a ziplock bag with water and 5 or 6 pennies and hang it in the
problem area. In my case it was a particular window in my home. It had a
slight but significant passage way for insects.Every since I have done
that, it has kept flies and wasps away. Some say, that wasps and flies
mistake the bag for some sort of other insect nest and are threatened by
this.

I swear by the plastic bag of water trick I have them on side porch (
our house entry) and all around the basement door. We saw these in
Northeast Mo at an Amish grocery store & have used them since. They say
it works because a fly sees a reflection & won't come around.

Regarding the science behind zip log bags of water? My research found
that each of the millions of molecules of water presents its own prism
effect and given that flies have a lot of eyes, to them it's like a
zillion disco balls reflecting light, colors and movement in a dizzying
manner. When you figure that flies are basically prey for many other
bugs, animals, birds, etc., they simply won't take the risk of being
around that much perceived action. I moved to a rural area ant thought
these "hillbillies" were just yanking my city boy chain but I tried it,
worked immediately! We went from hundreds of flies to seeing the
occasional one, but he don't hang around long.