Yes I could have said groove but would not have been 'sew' cute!
I am enjoying sitting at my machine again. Do have to move around a bit.
Can not sit too long or stand too long, cutting or  pressing.
So I am like a yo yo... up and down!
I finished up the knee/leg PT in town. I am on my own now to do the PT at home.
Hope to begin walking again as soon as this heat ever lets up!
It is August though so do not see that happening anytime soon.
I am so ready for FALL!

Was going through some of my project bags and came across these applique cotton boll blocks I had cut and prepped  a few years back. 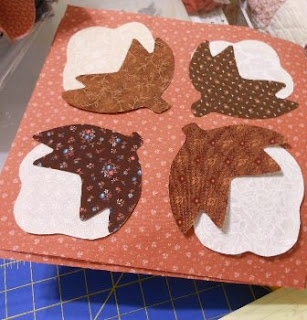 This is a very old pattern from at least 1980's. May have come out of an old Quilt Magazine. Just not sure. I did tweak it a bit to work for my plan. I made my Mama a ruffled pillow with it way back when and had planned a a lap throw at some point! Did not happen.
I decided to use 3 of these blocks. Needed two pieced ones to make up a runner.
Choose Bonnie Hunter's 2010 mystery quilt block, Roll Cotton Boll Roll. I think this quilt pattern now available in her new book. Had enough of the original fabrics to use too! Old Cranston  and Marcus Brothers prints. Bought either at Cloth World or Piece goods! Both of which no longer exist. 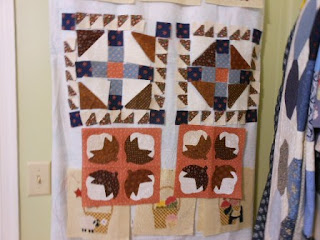 Pieces up on my new design wall. Yes that is some Bunny Hill Tisket Tasket blocks there too. Just a wee bit more hand work and I will have them ready to sew into a top too! 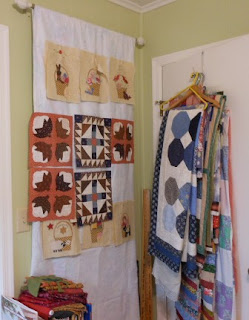 Had the blocks finished. Was waiting on some thread I had ordered from Superior Threads to arrive.
A silk one for the creamy cotton parts to applique with and also quilt. Have one called Pine Cone to use on the cotton husk part. They arrived yesterday! 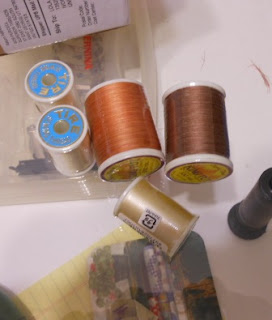 Yes that is an extra one..called Flower Pot. Just so Fallish and they were on sale!;-)
So will be busy soon on this Cotton Boll Runner.
I did begin another smallish project waiting on the thread. More later.
Feels good to be doing what I love again!
at 1:19 PM